Policy debates related to stimulus packages and fiscal consolidation programs have renewed academic interest about the effects of government activity on the macro-economy. In particular, the response of current GDP to a unit increase in government spending, the so-called (short-run) government spending multiplier, has attracted considerable attention despite the large uncertainty surrounding its measurement (see Ramey, 2011 for a survey). The empirical estimations of this multiplier found in the literature vary with many factors including the econometric approach, the identification strategy, the structural model, the state of the economy and the nature and duration of the fiscal change (see among others, Cogan et al., 2010, Uhlig, 2010, Christiano et al., 2011, Auerbach and Gorodnichenko, 2012, Coenen et al., 2012, Leeper et al., 2011, Fève et al., 2013, Erceg and Lindé, 2014, or Fève, and Sahuc, 2016).

In Dupaigne and Fève (2016), we assess the question of whether the particular time profile of government spending has any effect on the value of the fiscal multipliers. As an analytical tool, we use a relatively simple model including capital accumulation, choice of labor supply and stochastic government spending. This model is sufficiently simple to get exact solutions which provide insightful analytical results. It nevertheless shares the key ingredients present in the Dynamic Stochastic General Equilibrium literature (see Coenen et al. 2012): the utility is separable between consumption and leisure (consumption and leisure are deliberately maintained as normal goods), a constant return-to-scale technology combines labor and capital inputs, and the stochastic process of non–productive government spending is exogenous and persistent.

With this laboratory in hand, we show that the persistence of government spending shapes short-run multipliers through the response of private investment. How does this investment channel operate? The fiscal stimulus, which acts as a drain on resources, has two opposite effects on investment. On the one hand, households want to smooth their consumption and eat part of the existing capital (a crowding-out like effect). On the other hand, it stimulates employment (in our setup through a standard negative wealth effect) and the marginal productivity of capital, increasing the demand for capital services. What matters for capital accumulation and investment is in fact the expectations of next period labor input. The more persistent the shock, the larger is that expectation. Capital accumulation is therefore desirable when government spending and employment are highly persistent, while households facing very temporary ﬁscal shocks exhibit negative savings. When the persistence parameter of government spending is equal to the degree of smoothing in equilibrium consumption, the crowding-out and crowding-in effects exactly cancel out. Conversely, highly persistent policy induces that the crowding-in exceeds the crowding-out and the aggregate investment will increase.

The literature has progressed for analytics of fiscal multipliers, but in (repeated) static models with constant capital (see Hall, 2009, Woodford, 2011, or Fève et al., 2013). The resulting multiplier only results from the intra-temporal allocations (the marginal rate of substitution between consumption and leisure, the marginal productivity of labor and the aggregate resources constraint) but ignore expectations about the timing of government policy. In our more general setup, we first connect this concept of constant capital multiplier to the one in which expectations and adjustment of investment matter. We notably obtain that ignoring the investment channel and expectations about the profile of fiscal stimulus may lead to underestimate the true multipliers, especially when the policy is very persistent (as we observe with actual data).

We then enrich the analysis by considering two thought experiments. First, we single out the role of two key parameters of the model, namely, how responsive (growth of) consumption is to the real interest rate, the so-called intertemporal elasticity of substitution in consumption, and how sensitive hours worked are to the wage rate, the so-called Frisch elasticity of labor supply. The intertemporal elasticity of substitution in consumption only modifies the size of the constant capital multiplier, but does not alter the effects of the government spending driven by expectations. The elasticity of labor supply plays in two directions. First, when this elasticity is lower, the constant capital multiplier is smaller because the labor supply is less responsive after the negative income effect. Second, a smaller elasticity of labor supply reduces the adjustment speed of consumption (for a given level of physical capital). This implies that the persistence the fiscal stimulus must be higher to insure a positive response of saving.

In our second experiment, we consider the existence of hand-to-mouth consumers (see Gali et al., 2007), that is, agents that simply consume their income every period, as it is observed in the data. We interpret this fact as a consequence of imperfections in ﬁnancial markets. With this new setup, our previous results are magniﬁed. When the fraction of these households is large enough, aggregate consumption may increase after a government spending shock. However, a positive response of consumption is neither necessary nor sufficient to obtain an output multiplier above unity.

To see these results more precisely, the following Figure represents the government spending multipliers of consumption, investment, and output for different combinations of the persistence of the fiscal stimulus (ρ) and the share of hand-to-mouth consumers (λ). These multipliers are defined as the change in the corresponding variable, either consumption (Δc0), investment (Δx0), or output (Δy0), relative to the change in government spending (ρg0) that originated the adjustment. 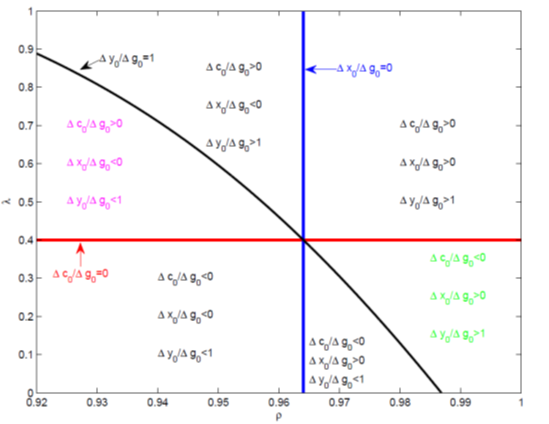 First, they imply that short-lasting stimulus packages fail to stimulate one of the components of aggregate demand, physical investment. It is interesting to note that for the estimated values of government spending persistence (i.e., the estimated first-order autoregressive coefficient), the response of investment is positive with our calibration. Hence, stimulus packages designed as increases of typical government spending should be preferred to specific, and shorter-lived, spending.

The second implication concerns the relevance of fiscal multipliers estimated using empirical approaches, such as Structural Vector AutoRegressions (SVARs). According to our results, identification strategies equipped to control for the persistence of the shock deliver fiscal multiplier estimates which are useful for policy guidance.

The investment channel matters a lot for the effectiveness of the output multiplier. Depending on the persistence of the fiscal stimulus, this channel dampens or ampliﬁes the output multiplier obtained in a static setup, i.e. without capital accumulation. These multipliers are analyzed in various dimensions: intertemporal elasticity of consumption, Frisch elasticity of labor supply and imperfect ﬁnancial markets under the form of hand-to-mouth consumers.

Professor at TSE and UTC and ADEMU researcher, Patrick has also been director of the doctoral school, a research fellow at Banque de France and co-editor of Annals of Economics and Statistics. His research interests include macroeconomics, international economics and applied econometrics. He received his PhD at University Paris I.

Professor at Paul Valéry University in Montpellier and ADEMU researcher, Martial has been closely involved with Toulouse research since 2001. His research interests include macroeconomics, international economics, applied econometrics, fiscal policy and business cycles. He earned his PhD from University Paris I.

Erceg, Christopher and Jesper Lindé (2014), “Is there a ﬁscal free lunch in a liquidity trap?” Journal of the European Economic Association, 12, 73–107.

Fève, Patrick Jean-Guillaume Sahuc (2016), “In search of the transmission mechanism of fiscal policy in the Euro area.” ADEMU Working Paper 2016/028.