In this months Perspectives, ADEMU researcher Jordi Caballé examine the effects of migration on unemployment and austerity, with co-authors Guilherme Bandeira (Bank of Spain) and Eugenia Vella (University of Sheffield).

Worsening labour market conditions and fiscal tightness in the aftermath of the recent financial crisis have led to increased migration outflows from peripheral countries of the euro area (see figure, below). The surge in unemployment rates and the lack of work opportunities, together with fiscal austerity involving tax hikes, cuts in social benefits, and restrictions in new recruitment of public employees, have contributed to this notable increase in migration flows. 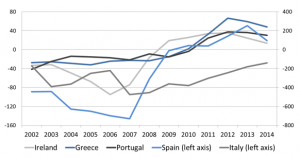 Figure: Net migration flows from the periphery of the euro area (in thousand persons). Source: Eurostat.

The migration response to the crisis has been considerable in Europe, in contrast to the US, where no evidence of greater inter-regional labor mobility is found in reaction to labor market shocks (Jauer et al., 2014). For instance, Greece and Spain exhibited net migration outflows in 2013, representing 2.2% and 1.9% of the workforce, respectively (Lazaretou, 2016).

Over the period 2008-2015, 608,000 Greek residents aged 15-64 left the country in search of employment, better pay and better social and economic prospects. In 2014, the unemployment rate in Greece rose to around 28%, more than triple that of 2008, with a profound impact on the mobility decisions of the Greek people, previously considered as the least favorable Europeans, after the Cypriots, towards long distance mobility.

In the case of Spain, migration outflows went from an average of 0.4% of the population over the period 2008-2010 to 1.2% in 2012, when the country started recording net emigration for the first time since the 1970s. This involves high mobility of foreign nationals: in 2012 approximately 5% of foreign residents in Spain left the country, while less than 0.1% of Spaniards born in Spain emigrated. However, since 2007 there is also net emigration of the latter group with outflows tripling between 2006 and 2012 (Izquierdo et al., 2016). Since 2010, outflows have totaled more than 400,000 per year, which is, both in absolute and relative terms, the highest level of emigration in Spanish history.

In the ADEMU working paper “Should I Stay or Should I Go? Austerity, Unemployment and Migration,” by Guilherme Bandeira, Jordi Caballé, and Eugenia Vella, we study the macroeconomic consequences of migration and its implications for business cycle fluctuations and try to shed light on the interactions between fiscal consolidation and endogenous migration decisions.

Although mobility in response to disparate labor market conditions might result in improvements in aggregate employment, the impact on local adjustments hinges on a number of factors. First, as migrants flow abroad, labor market tightness increases in the home country, putting upward pressure on wages and hampering firms’ marginal costs. Additionally, as employed workers also choose to emigrate, firms not only find it more costly to hire new workers but also face a shortage of labor. Second, migrants take with them not only their labor supply, but also their purchasing power, inducing a higher fall in internal demand during bad times. Although this impact can be mitigated if emigrants send some of their earnings back home, remittance inflows in the periphery have not increased at the same rate as emigration and amount only to a small portion of total GDP.

Labor mobility also has fiscal consequences. On the one hand, migration shifts the tax base, both by affecting private demand and, to the extent that employed workers decide to leave, by reducing taxable income. However, migration decisions also depend on migrants’ expectations regarding future socioeconomic conditions and the security of their future in the home country. In other words, migrants may leave due to the worsening of the domestic fiscal stance and the perception of future austerity. On the other hand, migration can act as a fiscal stabilizer, mitigating increases in unemployment and therefore lifting fiscal pressure off national governments by reducing the payments of unemployment benefits.

To assess the interplay between migration, the macroeconomy and fiscal consolidation, in comparison to a counterfactual situation of immobility, we introduce endogenous migration decisions in a Dynamic Stochastic General Equilibrium (DGSE) model of a small open economy with search and matching frictions, endogenous labor force participation, and sticky prices. In the model, labor force participants, including both the employed and the unemployed, have an incentive to migrate abroad where better wage and employment opportunities exist.

We first investigate the importance of the migration channel over the business cycle through the dynamic responses of our model to standard TFP, monetary policy and government spending shocks. We find that a TFP shock induces a return of migrant jobseekers, which reinforces the increase in aggregate demand and output, with short-run unemployment costs that are reversed in the medium run. Workers reduce substantially the intensity with which they look for jobs abroad, which reinforces further the decrease in the total stock of migrants and the boost in aggregate demand and output, while mitigating the return of migrant jobseekers relative to a model without cross-border on-the-job search.

Concerning monetary policy, an increase in the nominal interest rate leads to an increase in migrant jobseekers, which reinforces the decrease in aggregate demand and output, with short-run unemployment gains. In addition, on-the-job-search abroad increases in the short run, driven by the reduction in the real wage.

A government spending shock initially induces a return of migrant jobseekers, given the increase in labor demand. However, this is reversed in the medium run due to a fall in the real wage from the wealth effect of the shock, which increases labor market participation. Yet, the presence of labor mobility mitigates this wealth effect (and so the fall in consumption and investment), reinforcing the output increase, accompanied by short-run (medium-run) unemployment costs (benefits). Interestingly, workers increase persistently the intensity with which they look for jobs abroad because of the fall in the wage, mitigating the migration of the unemployed relative to a model without on-the-job search abroad, since for the household the migration of the employed is translated immediately to a job match abroad.

We then investigate the economic consequences of migration during fiscal consolidation episodes. In particular, we consider fiscal consolidations implemented via cuts in public expenditures, cuts in unemployment benefits, or increases in labor income tax rates. Fiscal consolidation is modeled as a negative shock to the debt target. Our findings indicate that a tax-based consolidation induces the highest migration outflows in the short run, which exacerbates significantly the induced GDP contraction.

Cuts in unemployment benefits induce the strongest reallocation of jobseekers towards the foreign labor market in the medium run, but with more favorable effects on GDP and unemployment. This is because the domestic wage adjusts downwards in this case, as the outside option of workers in the wage bargaining is weakened. Both a tax-based consolidation and a consolidation through cuts in unemployment benefits significantly increase the intensity with which current workers look for jobs abroad, which mitigates the migration of the unemployed.

A higher stock of migrants abroad has a negative impact on internal demand, deepening the GDP contraction in the case of tax hikes and mitigating the expansion in the case of cuts in unemployment benefits. Cuts in unemployment benefits induce the most persistent increase in the intensity of the on-the-job search because of the downward adjustment in the real wage. Government spending cuts, on the other hand, have a relatively small impact on migration as this instrument impacts directly on aggregate absorption and does not deteriorate labor market conditions as strongly as tax hikes do.

To finish, we should mention that restrictions in new recruitment of public employees have also been important in the fiscal adjustment of peripheral countries, where the public sector is sizeable (e.g. Greece, Spain, and Italy), and have led many graduates, who were previously absorbed in public sector jobs, to emigrate. Further work in this area could therefore look into the effects of public wage bill cuts and examining the interplay with migration decisions.

Guilherme Bandeira is Research Economist at the Bank of Spain. He obtained his PhD in Economics from the European University Institute in Florence. His research interests include commodity prices, housing market, migration, fiscal policy, currency unions and sovereign risk.

Jordi Caballé is Professor of Economics at the Universitat Autònoma de Barcelona. He obtained his PhD in Economics from the University of Pennsylvania. He is researcher of the ADEMU project. His research is focused on the analysis of the effects of fiscal policy, microstructure of financial markets and decision under uncertainty.

Eugenia Vella is Lecturer in Economics at the University of Sheffield. She obtained her PhD in Economics from the Athens University of Economics and Business. She held a Max Weber Postdoctoral fellowship and a Jean Monnet Postdoctoral fellowship at the European University Institute in Florence and has been visiting researcher at the Universitat Autònoma de Barcelona. Her research interests are in the areas of macroeconomics of labor markets, fiscal policy, environment and economic growth.